We had been saving up, in between buying necessary materials, so that we could make sure that we had our toilet indoors before winter hit. Because we didn't get our septic or our well and this summer, we knew we were going to have to look at better alternative to our out house. Although we love our outhouse, it is almost full, and due to the layout of our land, we don't have many options of where we can move it and I don't relish the idea of trekking up or down a mountain in the dead of winter in order to utilize the facilities. We did a ton of research on everything from a humanure toilet to an incinerating toilet and landed on this one: Natures Head self contained composting toilet. 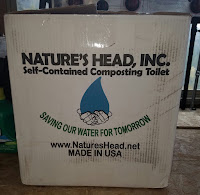 Don't you just love their motto too!

Not only did we want something functional and easy-to-use, we kind of wanted something that resembled the traditional toilet, and was somewhat aesthetically pleasing. The reviews on this toilet have been phenomenal and there are a lot of people who utilize them in their RVs and boats now in lieu of a black water tank. I figured if you could use them in that small of a contained environment, putting it in a full sized cabin bathroom should be a simple no-brainer, right? 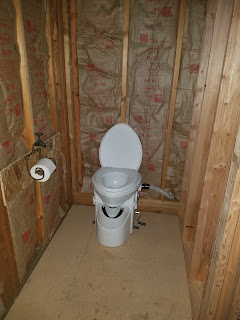 Of course, the bathroom is unfinished, but we have an indoor toilet!!

The unit is comprised of three main parts; the bowl, the liquids bottle, and the base.

The bowl houses several important items; the solid waste trap, liquid waste drain, vent, circulation fan and exhaust tube.  Within the bowl, toward the rear is a trap door for solid waste. The trap door is opened and closed utilizing a small lever on the left side of the bowl within easy reach when in the seated position.  Simply open the door prior to use and close it upon completion.  Near the front of the inside of the bowl is a slightly indented area with two holes in order to divert, catch and drain the liquid waste into a removable container located at the front of the base.  The entire design is intended to ensure the separation of solid and liquid waste in order to promote composting. 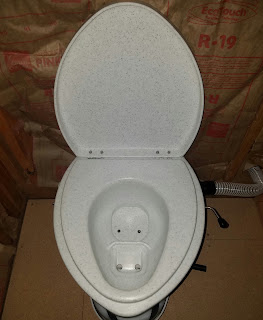 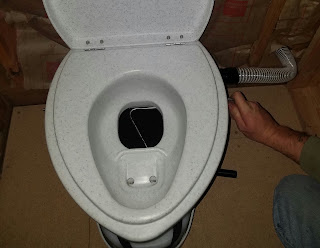 You can see the lever action on the right hand side.


The vent is on the opposite side of the bowl from a small 12V fan in order to pull fresh air through the system and out an exhaust pipe in order to vent any odor that may occur, and promote the composting process. The fan is connected to a deep cell battery and runs continuously.  The battery is connected to a battery charger which then recharges the battery whenever the generator is running. 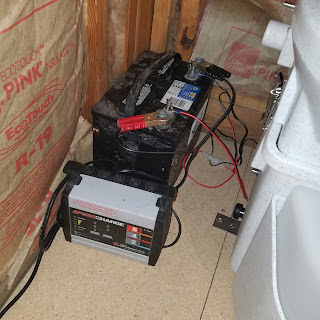 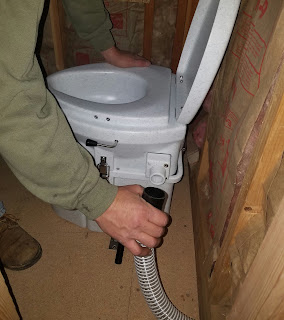 The bowl can be removed from the base by unclipping the two side clips on the unit and tilting the bowl back and slid off the hinge. This allows total access to the base for emptying the compost and refilling the unit with the compost starter material. 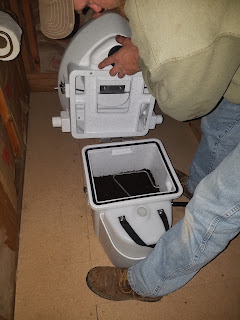 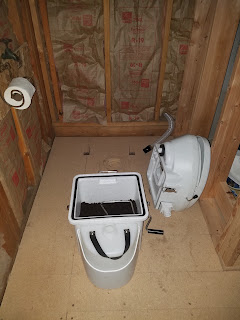 The base will collect all of the solid waste and produce the compost.  It houses the agitator arm, which extends out of the side of the unit to a handle that you crank after use to "stir" up the contents after use.  It also provides a solid foundation on which the bowel sits.  You can see the liquids bottle mounted just to the front of the base with a strap handle that enables you to easily lift the bottle out of the unit for disposal. 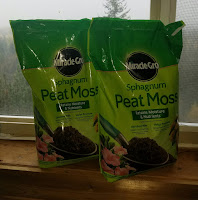 You can utilize either coconut fiber or sphagnum peat moss as your composting medium in the base to get things started. ( I want to note that Miracle-Gro is NOT recommended due to the fact that it has additives in it; however, in anticipation of being able to easily find large bricks of peat moss at our local hardware store and not planning ahead for the season change, this was all that they had left locally. So while it is not recommended, it can be used, but the rate of composting will be affected. We will definitely be ordering an organic brand of Sphagnum peat moss the coconut fiber for future use.) Moisten your composting medium to a slightly damp consistency and fill up to the level of the horizontal agitator arm. 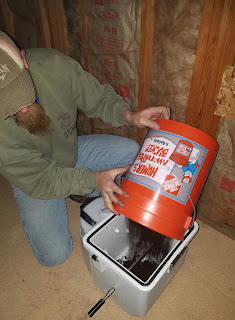 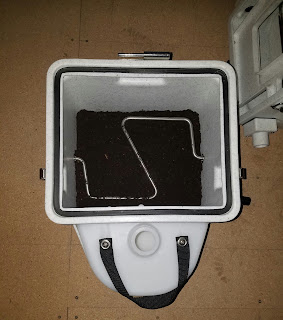 After completing your "business", you simply close the trap door, reach down and rotate the agitator handle a few rotations to "mix" the compost up, and spritz the urine area of the bowl with a little vinegar water to freshen it up. 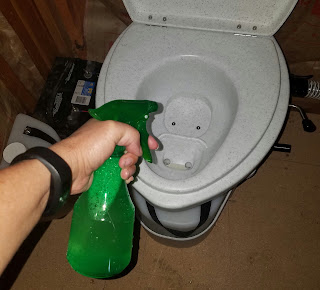 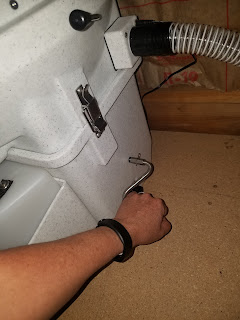 So now that I've covered the details of the toilet itself, how well does it actually perform?  To be honest with you, I agonized over many of the possible pitfalls of getting this toilet.  I mean, after all, we spent a small fortune (for us) on a toilet that, if it didn't suit our needs, would set us back tremendously... Not to mention that we would be back to square one when it came to what we were going to do for a bathroom this winter. Would the the bowl actually separate the liquids from the solids?  Would we have to worry about "skid marks" and if so, how would we clean them? Would it smell bad? How often will we have to empty the unit and how hard or unpleasant will that be?

Well, after having the family "christen" the toilet, I am happy to report that the solids and liquids are readily separated, the hole for the solid wastes is plenty large enough that we have not had a single "skid mark" incident, and there is absolutely no odor.  When I say "no odor", I mean that there is even less odor than conventional toilets!

I will check back in with you to let you know how long before this unit needs emptying when being used full time by a family of five.  I will also let you know how that goes.  For now though, I have super high hopes for this toilet, and so far am super happy... Especially the part where I get to do my business indoors!!